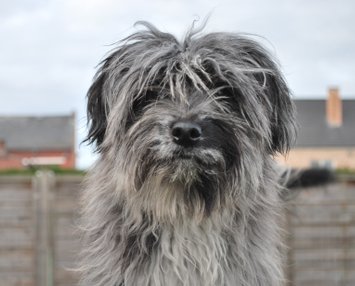 When the puppies were born, I felt magic when I looked to a little blue-spotted-eye harlekin.

When her sister Phoebe was 7 months I‘ve received a message from her breeder Silke to ask if everything was fine with Phoebe. I answered that it couldn’t be better, she was fantastic! Phoebe was our treasure! I’ve got the news that the previous owners of “Yanu” Elenya du Mourioche brought her back to Silke, but there was already someone else who was interested in her and planed a visit.

The week after the news I was thinking about Yanu all the time and printed out her picture and looked how beautiful she was. Till Friday afternoon… I was at work… and received a message from Silke that they didn’t take Yanu and if I still would like to have her, now I could… I couldn’t stop the tears running over my face. I called Ivo, but at first we weren’t convinced. We just had a young pyrshep! And what if there was something really wrong with Yanu? But what if it is just meant to be, maybe she just belongs to us! I kept fighting to myself until I arrived at home. Ivo already loaded the mobilehome (because we went to an agility trial in the west of Belgium) and he said “jump into the mobilehome, we’re going to Germany”.  I jumped into Ivo’s arms and gave him a big hug. Five hours and 430 km later we arrived. It was love at second sight again! We didn’t need to hesitate, it was destiny for sure! We closed her in our arms and hearts, and will never let her go!

At 5 o’clock in the morning we arrived in Oostende, without sleeping, very tired, but so happy again! From the first day we had her, it seems that she has always been with us, and I’m sure… in our hearts she was…

When we’ve got home, we’ve had pasta in heart-design for dinner…

Yanu brought me everywhere were I wanted to be in life. She is my most special dog. I ran big events and stood with her on podiums, she gave me wonderful puppies, but most of all... she follows me with every step I take. She reads my mind. She is my soulmate, that's the reason why I wanted her puppies so badly! I'm more connected to her than every other dog.

Her caracter is not very easy, in the way that you should first read her manual ;-) She is very picky in liking people. And the people she adores, she will protect as a lion. She has a very strong own will. I always say that the only place where she listens well is an agility field :-D. But she can be very sweet. Yanu herself is quite dominant, but non of her puppies of the first litter are. She is food crazy and loves her little ball too. Sometimes she can be a dramaqueen, but oh yeah, she always get it her way... ;-)